“This pilot project has shown that we can work together to support women in making informed choices by providing access to the tools they need,” Minister of Health and Social Services Mike Nixon said. “The Government of Yukon is pleased to continue to support this worthwhile project.”

In March 2015, Fetal Alcohol Syndrome Society Yukon joined the University of Alaska’s two-year pilot project, which included the installation of pregnancy test dispensers and posters at key points in Whitehorse. The goal of the study was to assess the best method to increase awareness of the effects of alcohol during pregnancy on the unborn fetus.

While we won’t have the results of the University of Alaska study before early 2017, we are very encouraged by the uptake of the pregnancy tests,” Fetal Alcohol Syndrome Society Yukon executive director Wenda Bradley said. “It’s a simple idea that we hope will have a big impact on the public’s awareness of the effect of alcohol on a developing fetus and thus reduce the number of people affected by fetal alcohol spectrum disorder in the future.”

A different approach: The struggle to deal with FASD in the justice system

Fassy is hosting an International FASD Day Celebration lunch at Shipyards Park on September 9th. Everyone is welcome! If you bought raffle tickets in support of our lunch program, make sure you come on down to the lunch when the raffle draw will be held.

Fassy will be having a “FASD informed support” evening program running on October 24th, 25th and 26th from 6 – 9 pm. Please call NISJ at Yukon College to apply. You can call 867.456.8589 or email twright@yukoncollege.yk.ca for more information.

The first part of the research project collaboration with the University of Alaska, Anchorage has come to an end. We thank all who participated by taking the online survey. We look forward to the results of the research in early 2017.

We give a special thank you to the Jarvis Street Saloon, Grateful Spud, The Dirty Northern Public house and Yukon College for their participation in the research project. Without these community partners
we would have been unable to provide the dispensers or do the research without you! We also thank Yukon Brewing for their sponsorship.

We look forward to the ongoing partnership with Yukon College and the Dirty Northern Public House who are continuing to have pregnancy test dispensers in their facilities. The CPNP of Dawson City has a dispenser in the lobby washroom of the Downtown Hotel. They have sold 100 tests from this one site!!

We are looking forward to expanding this program – so if interested – please call!! 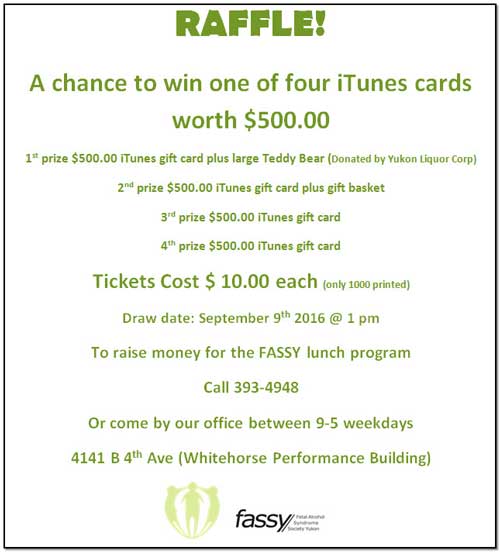 Fassy would like to announce that we are holding a raffle fundraiser for our socially inclusive lunch program! If you would like to buy tickets, please come on down to our office or call 393-4948 for more information.

The raffle draw is being held on September 9th at our FASD International Day celebration at Shipyards Park.

Support Fassy by coming down to our office and buying your tickets now!

Sorry, there are no upcoming events this month.